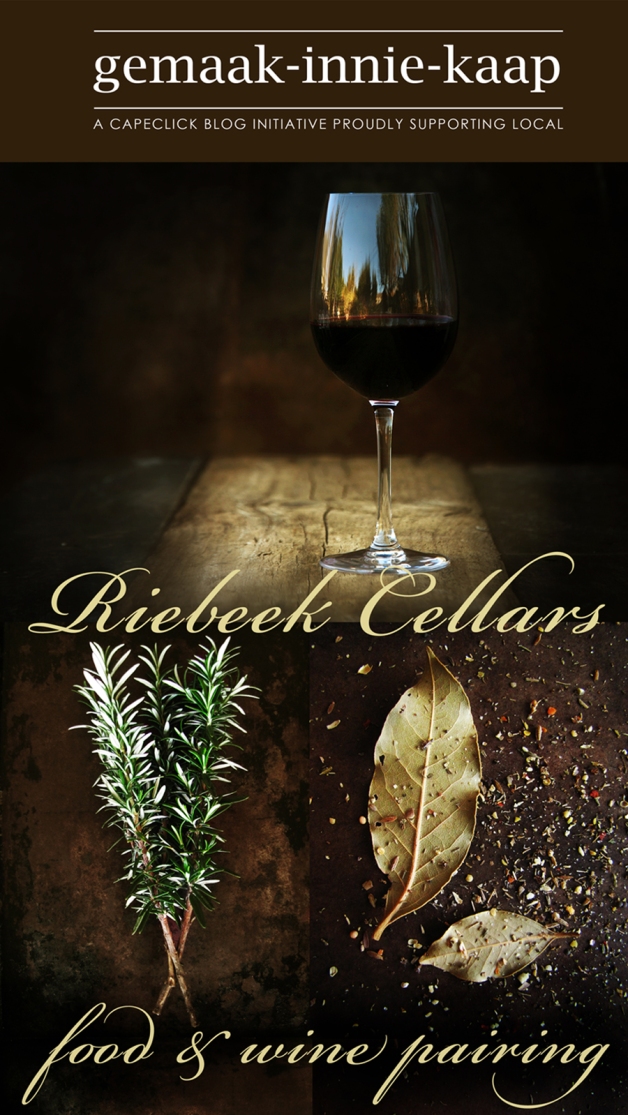 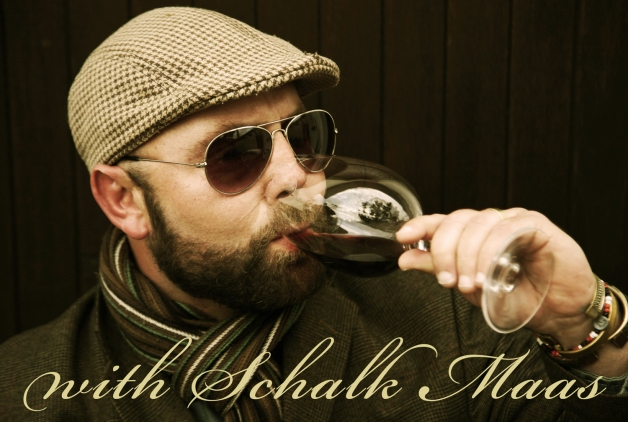 We, the Gemaak-innie-Kaap team are truly passionate about showcasing our locally produced wines and delectable traditional foods during this month of celebrating our heritage.    Ugh!!  That intro was for those whom prefer for us to sound less Capetonian in our blog.    Whatever!!   Its’ heritage month people…let’s not forget where we come from.   We, at Gemaak-innie-Kaap lurve drinking and eating and thus together with Account Manager for Riebeek Cellars in the Cape Metropole area and good friend, Schalk Maas, we will be embarking on a little journey, celebrating our wine and food heritage.

Riebeek Cellars, a medium-sized winery was established in 1941 at the foot of Kasteelberg in Riebeek Valley.  It’s wine making tradition however dates back to the 1600’s.    It was on a beautiful cape summer’s day on the 3rd day of February in the year 1661, when Dutch explorer Corporal Pieter Cruythoff stood with one hand on his hip and the other gently stroking his well cultivated beard – deep in thought.  With a slight smirk on his face and a rather satisfactory glint in his eye, he thought to himself:  “I could score serious brownie points with my commander should I be able to hand him a gift of true magnificence such as this one”.   Pieter was staring at a single standing mountain in absolute amazement (not sure what they were smoking back in the 1600’s).  He decided to call it Kasteelberg (Castle mountain) – in honour of the Castle of Good Hope.  Although very chuffed with his discovery, he still continued stroking his beard as if trying to squeeze out one more idea.  He looked intently at the two areas at the foot of Kasteellberg mountain and then softly murmured; “Hmmm…I think I shall name it Riebeek Kasteel and Riebeek West  and together it will be known as Riebeek Valley.”   He suitably named it after his commander;  and administrator of the fairest Cape – Jan van Riebeeck  (talk about being an ass creeper.   Some people just try too hard).

To get a better view of his discoveries, a quick climb up Kasteelberg mountains was the only order of the day, bearing in mind that tight trousers were very fashionable back then.  Once atop, Corporal Pieter Cruythoff  smiled broadly, sporting badly stained nicotine teeth, whipped out his hip-flask, took a swig or two or three between chewing import tobacco  and in a very self- satisfied tone said: “This is a bloody awesome spot to start producing damn fine wines”(okay okay.., maybe not quite as English as all that but in a more sombre Dutch kind of way).  Pieter however wasn’t the only one whom had winemaking on the brain in that particular valley.  Later when the French Huguenots stumbled  upon this area in 1688, they too loved the terroir so much that they decided to stay and introduce their very own winemaking traditions.  Today this combination of Dutch and French tradition is still manifest in the Riebeek Cellars winemaking ethos. That of uncomplicated simplicity.  And such, is their wine and food pairing too.   Please note, the added humorous bits are simply our modern version of the real story. 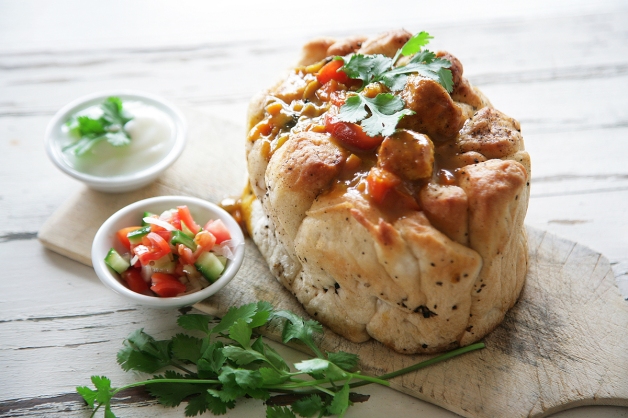 Bunny Chow or ‘Bunnies’ – as it often gets referred to by locals – is such an odd name for a food dish.  Here is one of the oh so very many stories behind the origin of its name.  Banias were the name given to the Indian merchant class community in Durban dating back to the early 1940’s.  The curry shop owners created cost effective ways to serve food by means of using halved bread loaves which was hollowed-out to scoop the curry inside.   It became extremely popular amongst the local workers due its affordability and was soon dubbed Bania Chow.  Whenever I order a Bunny Chow, the word graceful is out the window the minute I start eating (or shall I say digging in?).  What a mess!!  The constant licking of sauce dripping down the sides of one’s fingers and hands are unavoidable.  But damn – it’s good and it’s cheap!

Schalk mentions that since the introduction of food and wine pairing, interesting foods, such as the Bunny Chow, has been fast on the rise in upmarket restaurants locally and abroad especially when paired with a complimentary wine.  He recommended their accessible Riebeek Cellars Unwooded Chardonnay served slightly chilled for our mild cape malay chicken curry Bunny Chow.  His suggestion is based on this particular Chardonnay not having its customary oak and buttery flavours but instead offering a lingering citrus finish.    Chicken being a very light meat, it easily absorbs the somewhat sweet curry flavours, typical of a cape malay style curry, resulting in the dry yet fruity flavours of the Chardonnay uplifting,  matching and complimenting the taste beautifully. 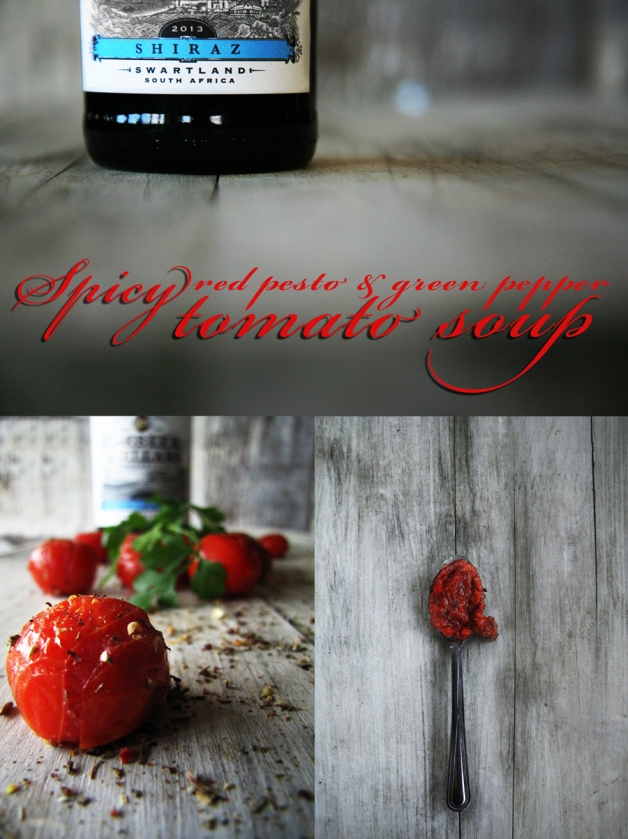 Here’s a trivial little fact that might pleasantly surprise you.  Riebeek Valley often gets referred to by another name; that of Shiraz Country.  This is due to the spicy characteristics of their Shiraz wines that have become renowned for its outstanding quality over the years.  It was the interesting spiciness  in the Riebeek Shiraz that made for a perfect pairing with our spicy red pesto and green pepper tomato soup.  In fact, it was the only option to pair with a tomato dominated dish, Schalk mentions.   Due the Riebeek Shiraz being such a rich, full bodied, velvety wine with hints of smokiness, it loves to be paired with domineering flavours.  In most cases, wine compliments food.  Whereas the spicy attribute of this particular red wine simply keeps adding to the already existing dominant flavour of the food.  Schalk however does add in a very stern voice (whilst stroking his beard) that it is imperative for red wine to be drunk at room temperature should you want the aromas of the wine to be at its best for pairing.  And for those, not in the know (like myself), room temperature for red wine is in fact 16 degrees Celsius. 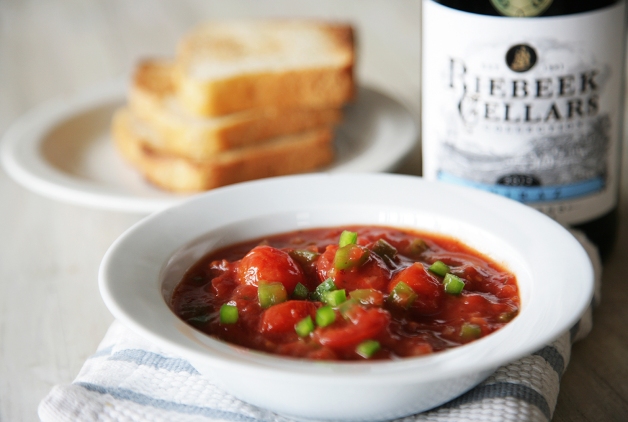 Schalk, whom is currently completing his Diploma in Wine at the Cape Wine Academy, explains that wine and food pairing is an absolute love as there are no rules, only combinations that compliments each other.  He feels that Riebeek Cellars have always created an environment which helped him and his colleagues to enjoy and experience wine at its fullest potential.  His wine knowledge is greatly due to the passion that Riebeek Cellars showered on him, allowing in him to soak up, embrace and together with the environment, to build knowledge through experience and education.

He parts with these words as he pours the last of the wine into our glasses; “Go ahead, experiment with wine and food combinations, never be too serious about it as there is no right or wrong.  Simply ensure, that you always add the most important ingredient…tons of fun!”. 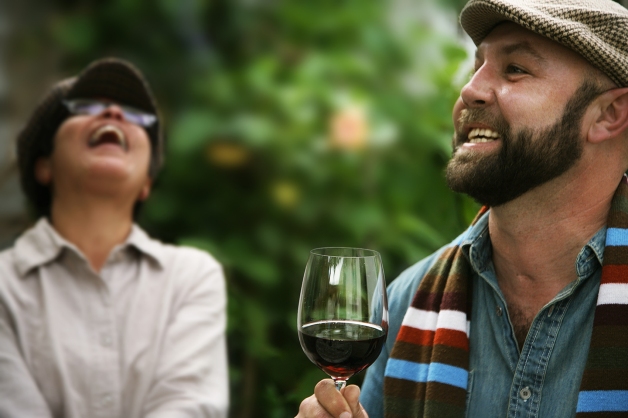 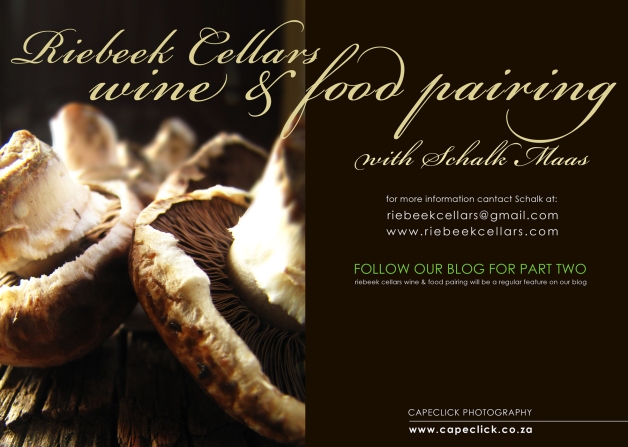